7 hours in a glider above the Alps 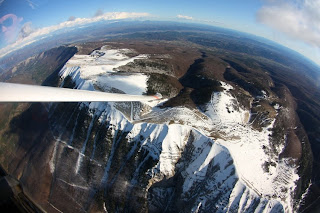 As well as building my flying hours, I get to fly gliders every now and then and got the chance to do a 7 hr flight across the French Alps, flying a circuit of just over 300 km (160 nm), and a total flown distance of 660 km (350 nm).
We reached an altitude of 15,000ft in a very cold and dry air, using the waves as a mean of soaring. We could have climbed probably up to 20,000ft but it was just too cold.
Needless to say the view from such high altitudes is absolutely amazing!

The glider-towing is going well despite the quite challenging weather. I'm on my way to my 200th tow flight already.
The flying in itself is not difficult, what makes it interesting is the challenge to find a thermal (column of rising air) or release the glider on a ridge with upgoing air, usually surounded by dozens of gliders, most of which are difficult to see.
We use the gliding equivalent of the TCAS, called "Flarm", as a mean of detecting other gliders and tow planes in the area. It does not always work though.

When the airfield is wet (as it has been for the past few days), we use solely the short concrete strips to take-off .. and to land. Some landings look more like an aircraft-carrier landing, and it is possible to stop the plane within a hundred meters (330ft).
The fun begins when we release the glider and make a steep descending turn, well over 60° bank, descending between 2000 and 3000ft/min back to the airfield.
The soaring centre's activity is doubling from this week onwards, and will double again for the summer period.
I've been flying around 2 hours a day lately, which is quite good already, considering we fly pretty much everyday, whatever the weather does to us.

What usually means a "no-go" for a plane pilot, can actually be excellent for a glider pilot.
A strong wind creates waves with very good rates of climb (often well above 2000ft/min of rising air), as well as a rising air along a ridge. We set up a surface wind limit of 40 kts.
A big dark cloud is the place where you want to fly if you are a glider pilot, as those dark cumulus are the sign of a thermal. The darker and the bigger the cloud, the stronger the thermal.
Very interesting flying, and well fun! 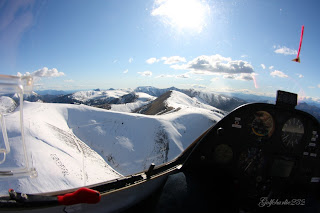 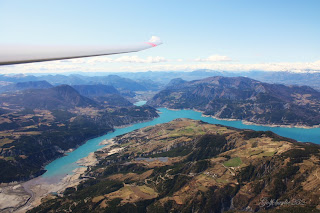 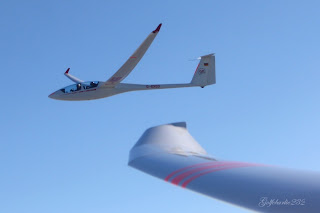 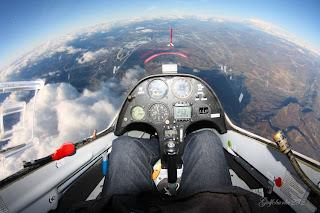 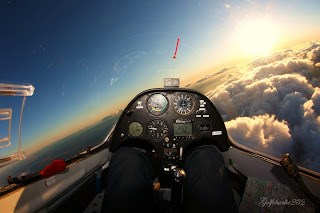 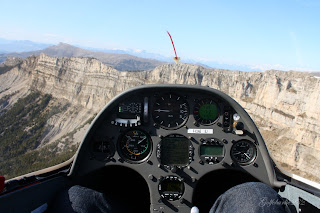 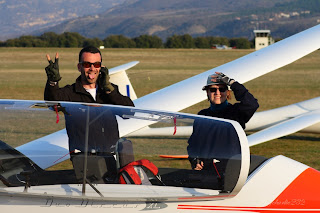 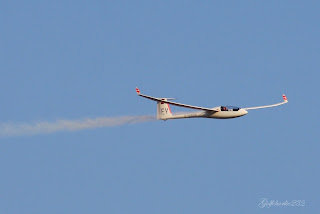 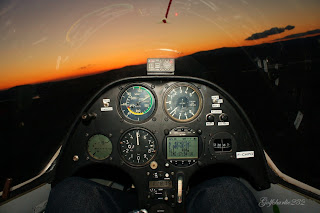 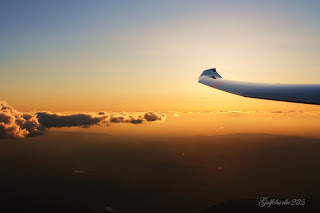 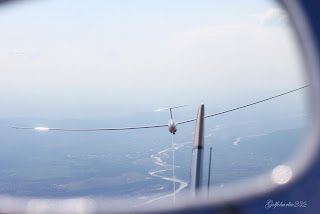 The time is clearly lacking to upload some pictures, although I have taken hundreds and hundreds in the past two weeks.
I've completed the towing training and started the real work, and it is absolutely great to get to fly everyday! I also got to do a 7 hour flight in a two-seat glider last week-end.

Although we don't fly non-stop from early mornings to late evenings, the days get fairly busy. In the morning, we have the briefings, then we get the planes all ready and make them shine. Around half-noon come the busy times, where most gliders take-off. On a Southerly wind day (usual for the area), we use three different take-off zones, all converging towards the south end of the airfield. At times, 8 tugs (towing planes) are running as the same time, and one or two persons are in charge of all those people in the control tower (rather an inflight information tower).
Things calm down around 2:30pm until 4, when gliders start coming down and more tows are due to be done.
In this time of year, most gliders are landed by 6:30pm, when we refuel and clean the planes before putting them back in the hangars. A final piece of paperwork and we're done for the day.

I'm also starting to get use to the information service in the control tower, and I'll be on my own for the week-end. We basically enter in a computer the take-off and landing times of each glider, their pilot(s), who towed them, etc ... , and we give basic information over the radio, both in English and in French.

Well, very pleased with everything and the flying right in the middle of the French Alps! 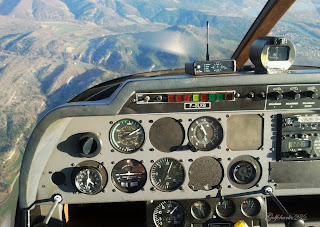 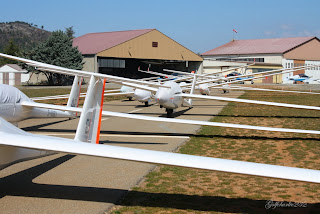 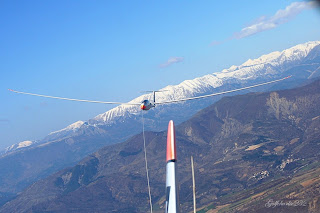 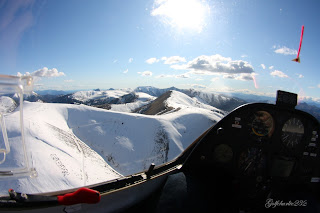 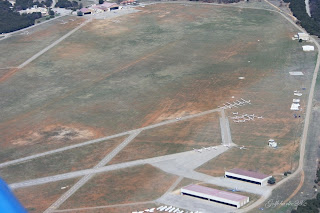 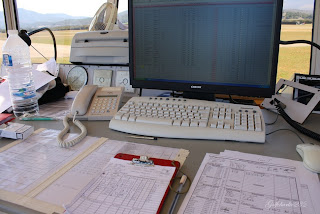 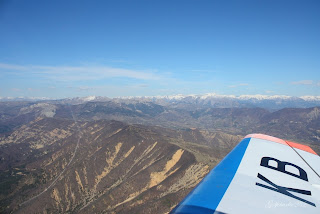 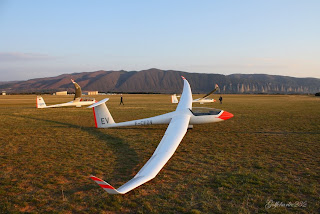 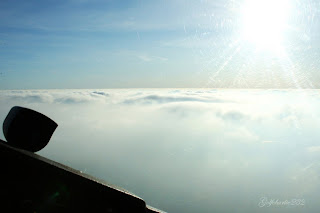 For many people, including pilots, getting a job during a recession is not an easy task.
For us, pilots, the tough part starts with having to stand out from the crowd.

I've got a few things that could slightly help: an English ICAO Level 6 (which most people of French Nationality don't have), a few flights as a safety pilot on a King Air Be90 and a University Degree related to aviation, but this is usually not enough.
All the rest looks the same as to what everyone's got: a JAA (European) frozen ATPL licence with 250 flight hours.
A great amount of luck is an obvious key factor in this industry, and this is something you can, and have to, trigger yourself.

What are the airlines looking for, other than a nice chap with good CRM skills?
Being type rated and having a reasonable amount of experience on the aircraft is probably the number one element they want to see on your CV, especially right now where there are hundreds or even thousands of experienced pilots previously laid off and looking for a job.
But hey, you can't just go on a random type rating course and buy some 500 hours on the aircraft and hope this is the aircraft your future employer will use, without serious contact beforehand. Some people give it a try but I don't intend to do this with 250 hrs total time. And even if I did, I wouldn't be able to afford it.

Number two key line on your CV is the amount of flying time you've got. And this is something you can work on much more easily that doing an A320 or 737NG Type Rating, and then buying 500 hours in the right hand seat of an airliner full of passengers and hoping that will get you a job.
And this 'number two key line' is what I chose to work on.

I finally managed to get a flying job.
Nothing very impressive, no big airliner with two big jet engines, no uniform with stripes, but hey, a flying job is a flying job, and I wouldn't give it away for anything!
I'm going to be a tow pilot for the European biggest soaring airfield. My job is fairly straightforward: towing gliders up to 2-3000 ft, and getting back to the ground asap, ready to tow the next one, and so on.
I passed the interview and flight test yesterday, and the course starts on monday, which I'm really looking forward to!

Some of my relatives were actually disappointed for me, but this actually more than fulfills my expectations. I am going to have a pretty awesome time flying those little planes, building up my hours (400 flight hours over the next 7 ~ 8 months), and sharpening my flying skills in a very busy environment.
On the plus side, on top of getting paid to do what I love the most, I get free accomodation and free food everyday, and I get to live in sunny South France. I also get to fly gliders (including instruction) for free. And, there's a swimming pool... What else? 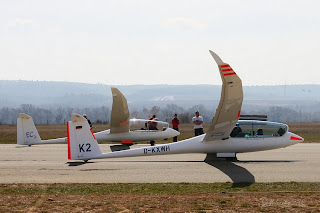 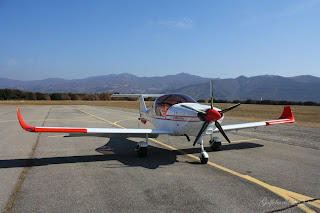 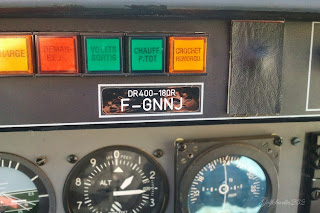 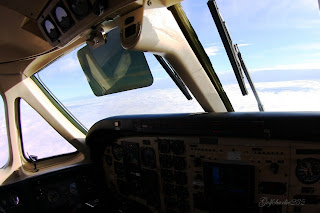 For many years, I've been inspired by a fellow French pilot now flying in the US for the World's largest airline: Delta.
He's kept on writing an online diary since 1998, and although we follow different paths, I share the same philosophy that contributes a great deal in leading to a successful pilot's carrier.

He once said, One of the best advice one could get, would be to not follow someone else’s advice.

If you do, you’re most likely going to end up disappointed and upset because someone not expert in the subject managed to persuade you he was right.

People don’t like to mind their own business. They feel like they have to share their opinion, even though you didn’t ask for it. They talk about a subject they do not master, but think they possess a great knowledge because they read newspapers and magazines.
"It ain't what you don't know that gets you into trouble. It's what you know for sure that just ain't so" (Mark Twain).

Those people tell wrong facts, and they tend to spread gloom and doom, this is why you should avoid them at all costs.

I’ve been told by countless people that the French education system was the best in the world.
Funny enough, none of those people experienced any foreign education system.
When I moved to England, I was told so many different stories about the country, the people, their culture and their way to teach; I was actually very surprised to realise most of those fairy tales were deeply wrong. Same happened when I went to the US.
And once again, none of those people ever experienced any of this themselves, however they are glued to their TV every single evening.

So, what's the deal about the French education system?
Some french people believe they possess a greater knowledge than people from other countries, especially America.
Having experienced both the American and the British way to teach, along with the french's, I believe the Americans are much more pragmatic when it comes to education, knowhow based (practical knowledge) rather than our fact-based knowledge.
And as Danny mentionned in his diary (link below), this is why no-one in America will end up flying a 737 with 200 flight hours, while this does happen in Europe.

The know-it-alls wander on the web forums and blogs, spread non-correct and depressing information, and use a confident tone while talking about the job they once dreamed of and failed somewhere along the way. Then, satisfied, they’ll switch off their computer and will walk off to their 9 to 5 job.

Without any doubt, listening to success stories is way more useful than taking any advice from those people.

I've decided, and this is where people started to disagree and shared that with me, to build up my experience in a way that is neither a job nor something you have to pay for, as well as keeping current my IFR and CRM skills as a safety pilot on the Kingair and possibly some other planes.
I have plans and opportunities, and once again, some people felt like they had to bring their own advice, arguing "this is not a good idea", because they have read otherwise in some random magazines.

Turn your back to them and walk ahead, this is probably the reasonable thing to do.

If I had followed any of the advice I received when I expressed my wishes to become a commercial pilot, I wouldn't be here today.
One reason to that: almost everyone whom I didn't ask any advice from, told me I should forget about my wishes and take up a normal carrier instead.
When I started my pilot training, those same people commented on how wrong I was to train in the UK and in the States instead of my own country. Today, I realise this is one of the best decisions I ever took.

Danny had below-average grades in French when he was in high school, and since then, he never stopped writing.
I was at the bottom of my class in English just 6 years ago, I never stopped working on it, and I am now close to be bilingual.

Fortune favors the bold, you have to act to make things happen. 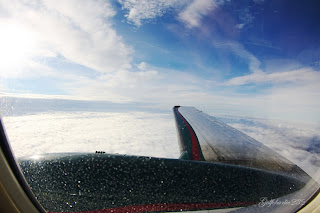 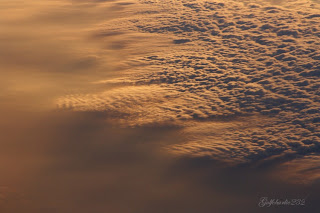