First IFR backseat on the Be76 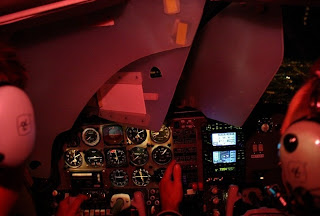 While the ATPL ground school gives us a growing amount of work, I somehow got the time to backseat on a 2 hour flight to Exeter last thursday.
What could be better after 3 hours of Principles of Flight and 3 hours of Meteorology ?

The trainee pilot was doing his very first flight on the plane after about 30 hours on the simulator, and I must say I was really impressed by his knowledge of the the aircraft, although he wasn't that quick on the checklists, which can be easily understood for such a complex plane.
It took us 30 minutes from engine start to clearance request at the holding point to allow for the checks and flight planning, but I reckon it gets better when you're used to it.

'Blackadder 07, holding short of runway 26, ready for departure', 'Blackadder 07, line-up 26, wind 030° at 4 knots, you're cleared for take-off'. (Blackadder is the callsign for the BCFT fleet).
Full throttle, and a second later an intense feeling of acceleration pushes you far into your seat with the nice sound of 360 hp roaring in the calm night. Such moments make you realise how much you love flying ...

Heading to the North-West and cleared to Flight Level 65 (6,500 ft), we could catch a glance at the beautiful Poole bay as we enjoyed a nice clear night. Quite mesmerising !


Still heading to the North-West, we eventually reached the bay between Wales and England with Cardiff in front of us and Bristol to the right. Time to turn left, as we were getting closer to Exeter we could distinguish a thin layout of low clouds building up as the night was becoming colder.
Holding pattern somewhere near EXT (Exeter airfield), I'm afraid I can't tell you much about that since I've never flown on IFR before and didn't have any charts with me, but it looked pretty tough ! 7 nm final for runway 08 at EXT, still doing a nice 140 kts ground speed, a few minutes later at about 200 ft AGL the instructor finally opened the blinds to allow the pilot to have a nice clear view of the approach lights and get that plane to the ground. Missed approach procedure just above the runway threshold, full throttle and that's when the instructor decided to put one engine on idle to simulate and engine failure.

After all sorts of events like those, we finally made our way back home at Bournemouth airport, ILS on runway 26 to finally make a very smooth landing ... 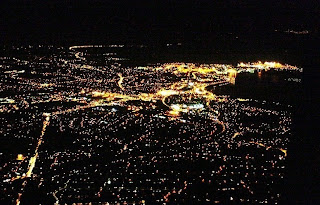 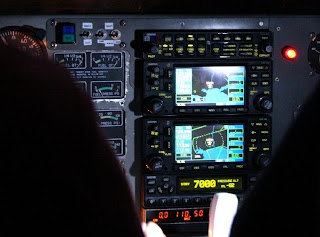 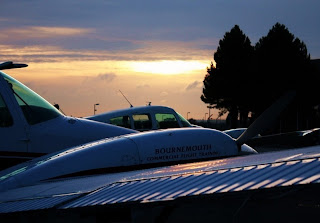 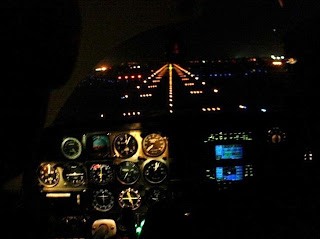 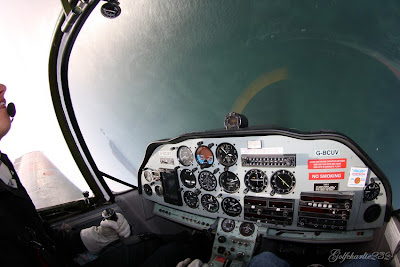 7:00 am, Sunday morning, it's already time to get up.
On a normal day, I would stay in bed for like 10 min waiting for the next alarm to wake me up again. If you didn't know yet, french guys are quite lazy and I'm not an exception.
Today was different however, James was waiting for me at the Bournemouth Flying Club to go on a formation flight to Goodwood (Chichester Airfield).

Two flights in a row, what an awesome week-end that is !
We flew from Bournemouth Airport (EGHH), taking off on Runway 08 under some pretty bad weather conditions (Clouds SCT at 400 ft, 10k visi though) but it got better really quickly. We then went straight toward the East, overflying the beautiful Isle of Wight with G-ECON (Cessna 172) on our right wing, then Portsmouth, Hayling Island, Chichester and finally Goodwood (EGHR).

Goodwood is a four grass runway controlled airfield with some very nice aeroplanes. There was a beautiful Extra 200 waiting for its pilot to do some aerobatics.
It is actually an ex-RAF airfield and was also used by the USAAF in 1942 as a fighter airfield for the 308th and 309th Fighter Squadrons.
I don't know if there are some of the old Spitfire V5s in those big hangars but it definitely is a great place to visit.

This is the Bulldog T1 after landing at Goodwood.
As you can see, it wears the RAF three concentric rings symbol on the fuselage, and in fact is was used as a trainer aircraft not that long ago.

Powerplant is a 200hp Lycoming with variable pitch propeller, enough to enjoy some aerobatics as we did on the return leg back to Bournemouth. 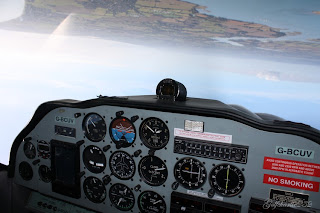 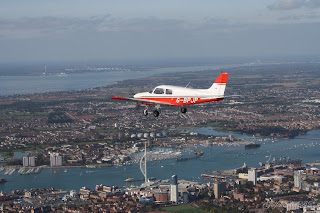 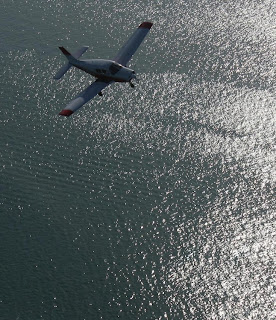 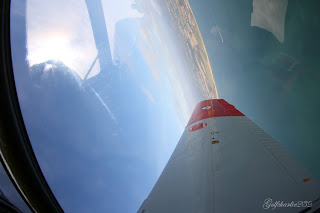 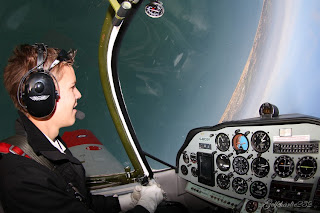 Email ThisBlogThis!Share to TwitterShare to FacebookShare to Pinterest
Labels: Aerobatics, Hoursbuilding in the UK 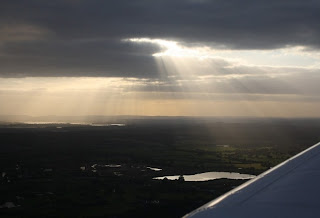 Fourteen months after my last flight on a light aircraft, here I am back in the air !
And what a great feeling that was !

I and a friend of mine flew at the back of a Piper PA-28 161, the student pilot was doing his circuits training prior to first solo.
In a busy environment with 737s operating on the same runway, the lovely view with Poole in the background, the sea not too far and Isle of Wight somewhere on the South-East, we had enough to be kept entertained as we were also trying to catch every bit of the ATC communications at the same time.

I should be back in the air again tomorrow, formation flight on a Bulldog along the South-Coast.
Keep tuned, more to come soon !
Posted by Golfcharlie232 at Saturday, October 17, 2009 2 comments:

Email ThisBlogThis!Share to TwitterShare to FacebookShare to Pinterest
Labels: Hoursbuilding in the UK 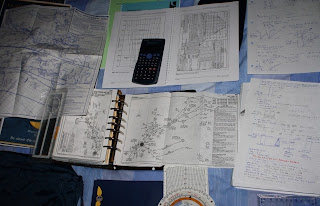 We had our Meet & Greet this tuesday with all the flight and ground instructors at the Bournemouth Flying Club.
Good opportunity to meet the other guys from the school, past students, and the people from the Flying Club.
As the local bar/pub is just next to the taxiway leading to runway 26, we could see from very close the various aircraft operating at Bournemouth airport, 737s, Beechcraft 76, Piper Seneca, Mystere 20, Falcon, ... and even smell the delicious kerosene odour. Awesome feeling, pilots know what I mean for sure!


The ATPL is going well so far, workload is gradually increasing but that's still manageable.
Anyway, I'm really enjoying it, learning new stuff about bigger aeroplanes is really exciting.
We seem to settle down at about 33 hours of lectures per week, and as I bought a car shared with two other people, we save about an hour every day as we used to take a bus and walk to go to BCFT centre. 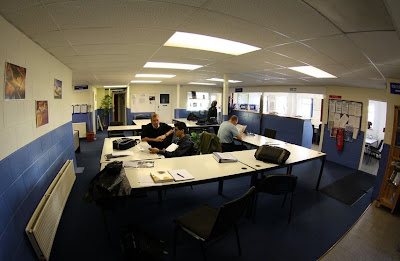 It's high time to give some update since the training has now started up.
We've just finished the so-called Fundation Week which aims at learning the basic of maths, general navigation and meteorology in order to be fully prepared for the next big step : the first 7 subjects of the ATPL.

The ATPL ? What does it stand for?
Basically, the ATPL, Airline Transport Pilot Licence is what we need to become commercial pilots.
We usually call the theoretical knowledge classes 'ATPL' although we should talk about ATPL Ground School instead.
At the end of the training, we will be issued with a Frozen ATPL (fATPL) that will be unfrozen after a certain amount of flying (1500hrs) and flying turbine-powered aircraft, thus fATPL refers to the 14 ATPL Ground School exams passed + CPL + IRME + MCC and possibly a Type Rating.

I'm not quite sure yet but the first 7 subjects should be :
The first week went fairly well, with a great opportunity to meet the other trainee pilots, instructors, have a better insight of what's waiting for us next, etc ...
BCFT have small but proper good facilities, and we can backseat on a sim (short for simulator) or an aircraft anytime after the lectures or at week-ends. Hence the pictures ...

I flew on the right hand seat of a FNPT II simulator that mirrors the Beechcraft Be76 used for IR flight training. The pilot had his IR test the following day and hopefully passed.
We did a Bournemouth-Cardiff flight on IFR (Instrument Flight Rules) with 150m visibily and 8/8 clouds - base at 400 ft. 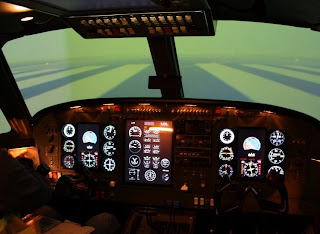 Holding Pattern over Cardiff airfield, followed by a missed-approach procedure and a right engine failure right after. Landing just after sunset, we got the runway in sight when the GPWS indicated ... 50 ft !
Posted by Golfcharlie232 at Saturday, October 10, 2009 1 comment: